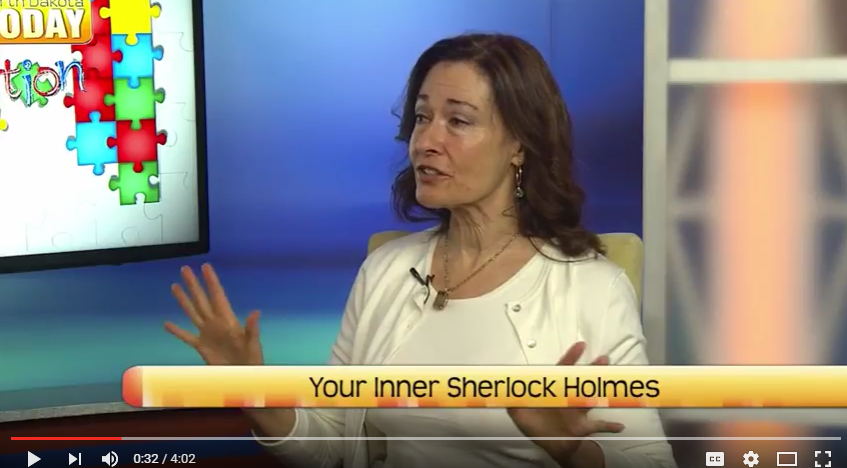 Kevin: Back on North Dakota today with the NDT Kids’ Connection and I’m speaking with bestselling author and family harmony expert, Lorraine Pursell. Lorraine, you like to talk about what you call “your inner Sherlock Holmes.” So a little explaining, please.

Lorraine Pursell: For those of you who don’t know who Sherlock Holmes is, he was a mythical character in the 1800s in London. And this guy was so super sleuth and he would solve all the cases for the Scotland Yard, the bubbling Scotland Yard, and he wouldn’t take credit for it. He’d see the case solved and that Scotland Yard’s solved it in the papers the next morning and he was just behind the scenes handling everything and solving these unsolvable cases.

Kevin: And he had a pal named Watson, Professor Watson. “Elementary, my dear Watson.” So what does Sherlock Holmes have to do with raising kids?

Lorraine Pursell: Well, there were a few things that he did that I have incorporated very well into my parenting philosophy and the things that Sherlock Holmes did that made him so successful were he hired the street urchins, the kids that were the orphans that no one would pay any attention. He would give them a couple pennies and they’d go underground and they’d find out all the little things that he couldn’t.

Kevin: Act as his informants.

Lorraine Pursell: Yes, but nobody even was paying attention to these people.

Kevin: Yeah. They just blended into the scenery.

Lorraine Pursell: They were invisible. They were like, “Kids, who are they?” The other thing, he was the master of disguise. Even Watson didn’t know it was him in a lot of cases. When he would show up on a scene he’d be talking to his character and it was his roommate.

Kevin: So are you telling us to become masters of disguise and then we’ll raise great kids or something? What?

Lorraine Pursell: Well, the thing is how can you incorporate those two things? One of the things I ask is, “Wo do you know?” As a parent who do you know that can help you especially as your child gets older? Let your house be the house where everyone shows up at and does their homework. You might be out $1,000.00 for pizza and pop by the end of their school career, but it’s at least where everybody shows up and you can actually be befriending some of their friends. And I’m not –

Kevin: We used to call it “be the Kool-Aid mom.”

Lorraine Pursell: Yes. Yes. Yes. So that’s – who do you know that can reach your child with you? Another aspect of, “Who do you know,” I’ll give you an example. I hired a tutor for my son because I got tired of being the homework policeman. I just was like, “No, this is not part of my job description.” So who do you know who can actually help your child get those things, those character building things that you’re unable to do for some reason or another because maybe it’s not your forte? So who do you know in that regard?

Kevin: Well, I’ll tell you one thing, just trying to do kid’s homework nowadays, that’s totally out of my purview. So you’re right. You’re dead on with that one. So when it comes to needing help and sometimes it hard for parents to swallow their pride, pick up the phone and call someone, I’m thinking you would be a good person to call.

Lorraine Pursell: Yes, because I’ve been there. I’ve really been there and I raised my son with the help of a parent mentor. And that’s why I became a parent mentor. So they can call me. You can call me. You can call me at 808-936-4370 – 808-936-4370 – and we’ll just have a chat. I wanna hear what’s going on with you. I can offer a couple tips that might give you some relief and if it’s deeper than that there are lots of things that I can offer you besides.

Kevin: And you can also e-mail you at info@lorrainepursell.com.

Lorraine Pursell: Yep. And we’ll schedule a complimentary consultation with you. I have limited spots, so call right now.

Kevin: Perfect. Thanks so much, Lorraine.

Kevin: And we will be right back [music playing].

Be sleuth and support your child with tips and techniques of the world’s greatest detective. Get FREE e-Book: www.StopYellingAtYourKids.com on raising great kids as a truly happy parent.

Self-Love Vs. Depression
The Real Reason You Were Born
I Call This Hope Against Hope
How are you?
I Wanted To Inspire You To Do Something Weird That Doesn’t Make Any Sense
People’s Hearts Healed From The Energy On The Call
Oprah Is One Of My Idols
How Would You Like To Feel Alive Again?
I need to tell you this- I was ghosted by The King + Best coaching deals EVER!
I was at an all-time low, addicted to Zoloft + Best coaching deal EVER!
Making Mom a Priority.
Self-love and Beauty
Live your dreams before they come true + limited bonus for EAS’s 1 year Bday
You don’t have to think that.
[Webinar} Queen’s Mantra: “Everything I do, I do with Love”
[Webinar} The 3 Keys to Being Queen Again- for Your Family
Tears streamed down my face before I realized I was a Queen…
What happens when we give up our power?
[Important replay] Step into your Queenhood.
[New webinar today] Are you dying to be the REAL you?
MAIN MENU